How a Burmese millionaire changed the world

On December 15-16, the Global Vipassana Pagoda in Mumbai hosted meetings to mark the 50th anniversary of Vipassana returning to India – with tributes of gratitude to Satya Narayan Goenka (1924-2013), the principal teacher of Vipassana. The powerful ancient practice of inner change he shared for 44 years is changing lives worldwide.

On June 21, 1969, a 45-year-old millionaire Burmese businessman arrived in Kolkata from Myanmar. Earlier at the Mingaladon Airport in Yangon, he had declared to customs officials that he was carrying to India a priceless gem; to startled officialdom expecting a ruby or blue sapphire from Mogok, he smilingly explained that the “gem” was Vipassana, the ancient truth-realization practice preserved in Myanmar and lost to India, the country of its origin, for 2,500 years.

Fifty years later, that “gem” that the industrialist-turned-Vipassana teacher Sayagyi U Goenka brought with him is taught in residential Vipassana courses free of cost to people in more than 100 countries.

“For peace in the world,” he often said, “there has to be first inner peace and harmony within the individual.”

A pattern and threads of life connect people, places, events in the changing tapestry of our impermanent existence.

So too with the life of Sayagyi U Goenka, Vipassana teacher to the world, from Indian president Ram Nath Kovind, business executives, the late Princess Galyani Vadhana of Thailand, prison reformer Kiran Bedi, and author Yuval Noah Harari to inmates in the Donaldson Correctional Facility in the US state of Alabama.

Sayagyi U Goenka revived in India the Vipassana practice that the Buddha rediscovered and shared as the universal path to experience real happiness. He taught Vipassana using scientific terms like his teacher U Ba Khin, the first accountant general of independent Burma, but unlike his teacher, he avoided using  the word “Buddhism,” the “ism” turning a practical path to experience truths of nature into another sectarian “religion.”

For the world to change for the better, individuals need to change, but change within does not come easy. It requires hard work. More people working hard to live a more wholesome life brings positive change in the world.

How to quantify positive change? Good news rarely makes the news.  Pessimistic perspectives of the world miss the normalcy of the good routinely happening in life. An air crash hits headlines as it should, but not the daily average of 102,465 civilian flights taking off and landing safely. A corruption exposé makes headlines, but how to quantify the honest work of many?

Likewise, Vipassana makes a positive impact deep like ocean currents or superficial like the churning surf, momentary or lifelong, depending on the individual’s right efforts.

The pagodas of Mandalay, the city of kings. The boy Satya Narayan Goenka liked being at the Maha Myat Muni Pagoda, often accompanying his grandfather.

A pattern of destiny linked Satya Narayan Goenka of Myanmar to India, to his ancestors from Churu in Rajasthan, the land of kings, to the royal city of Mandalay in Myanmar, where he was born, to Kolkata in 1969.

From Bengal, he went to Mumbai, where he restarted the wheel of Vipassana in the country of its origin. With Mumbai as home, Sayagyi U Goenka selflessly served humanity until he passed away peacefully, aged 89, on the night of September 29, 2013.

Shri SN Goenka will be remembered for adding joy & meaning in human life through his teachings. Saddened by his demise. RIP.

“Awake O people of the world … the dark night is over. The light of Dhamma is glowing…. The dawn of happiness.”

Those words inspire students as the morning light dawns in another day of a Vipassana course – another day of determined battles to drive out demons of negative habit patterns entrenched in dungeons of the mind.

The Vipassana teacher is only a guide in the self-dependent battle that has to be courageously fought. 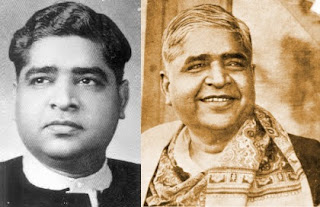 Left: Photograph of a young globe-trotting S N Goenka from his Burmese passport. Photo courtesy The Goenka family. Right: When he came to India in I969. Photo courtesy Northern California Vipassana Center

In Pali, Vipassana means to see reality as it is, not as we imagine or want it to be.

As eyes give sight, Vipassana gives insight, insight into what is this mind-matter phenomenon called “I.”

What is Vipassana? Sayagyi U Goenka explains.

The objective of Vipassana: to purify the mind. The object of Vipassana meditation: objectively observe the impermanence of bodily sensations (any tangible feeling in the body such as pain, pressure, heat, tingling, etc) arising and passing away each moment.

Sensations are not new, but new is the Vipassana-developed faculty to be objectively aware of this inner reality.

Every sensation becomes a Vipassana tool to develop equanimity to changing phenomena – to cope better with changes, the ups and downs of life.

At the apparent level, we react to the outside world with craving or aversion. At the actual level, we blindly react to sensations, pleasant or unpleasant. The life-changing realization: nothing in the outside is the real source of suffering or happiness.

The malady and remedy is within.

He shunned personal recognition and said he was only a medium, and that if not him, someone else would have done the work of revival of Vipassana in India and the world. The time had ripened, the “clock of Vipassana had struck.”

He had addressed the United Nations General Assembly, received the respect of kings, presidents and prime ministers, but functioned with minimal facilities while guiding a rapidly expanding global Vipassana organization. He most often had one full-time assistant. A part-time volunteer assisted him with his correspondence. No entourage, hangers-on, no cult, no personality-worship.

Vipassana, the self-dependent process of meditation to:
* develop experiential wisdom
* purifying the mind
* realizing what is this mind-matter phenomenon called ‘I’
* being free from illusions, delusions, deep-rooted negative habit patterns of the mind
* reduce ego
* be happy

The wandering mind causes problems. Vipassana anchors the mind with the reality of the present moment, with the arising and passing away within, with the eternal truth of the cosmos: nothing is permanent.

After more than 25 years of Vipassana practice, I have no doubt that Vipassana is the single most powerful force of inner change.

The world to change for the better needs the individual to change. Vipassana empowers individual change.

The world changes for the better with more individuals giving Vipassana an open-minded, fair trial. For online applications: www.dhamma.org

Asia Times is not responsible for the opinions, facts or any media content presented by contributors. In case of abuse, click here to report.
IndiaReligionBurmaBuddhismspirituality

Raja Murthy is an independent journalist contributing to Asia Times since 2003, The Statesman since 1990, and formerly for Times of India, Economic Times, Elle, Wisden.com etc. He shuttles between Mumbai and the Himalayas.